From Tripura to Rio with Olympic medal in mind is a little description of Dipa Karmakar who unfortunately missed a bronze from just 0.150 points, but her efforts were undoubtedly remarkable. A girl born in Agartala of Tripura to mother Gouri Karmakar and father Dulal Karmakar, who is a weightlifter as well and very proud of her daughter Dipa. 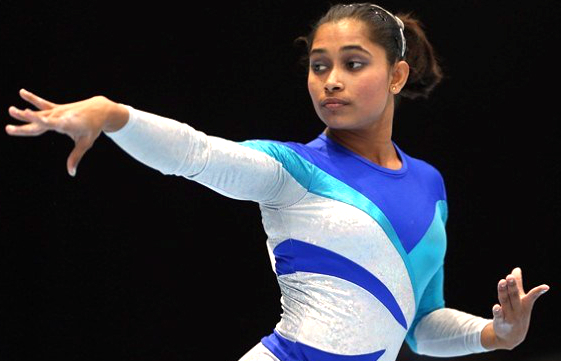 Dipa was only 6 when she started her career in gymnastics with coach Bisweshwar Nandi who shares her journey in sports. When she started practicing gymnasium initially, she had a flat leg which is not supportive for gymnastics so her coach started to work on Dipa to have a curved feet which was really a difficult task as this is a transformation of body part but Dipa karmakar was very young at that stage and hardworking too. So she made the impossible a possible deed and turned to be a tremendous sports-person.

Commonwealth Games 2014 in Glasgow brought her a good fame when she won a bronze medal and became the first female to achieve that honor. Dipa is first female Indian gymnast to compete in Olympics under gymnast category and first Indian to do so in 52 years. She is an Arjun Award winner under gymnastics in year 2015 and holds rank 8 in woman vault. She is one of the only 5 woman who landed successfully the Produnova, currently the most difficult vault performed in gymnastics.

Since 2007, the 23 years old have won 77 medals including 67 golds where she has also won junior nationals in Jalpaiguri in 2008. To be noted that she earned her first gold in 2002 at North East Games in Agartala. Sharing her childhood memories, her mother Gouri says Dipa was a determinant girl since childhood and decided to make her prominence in artistic gymnastics. She is a loved and supported girl from everyone around, her principal in school allowed her to attend only 4 major classes and concentrate more and more on her practice for gymnastics. When she won her Bronze medal in commonwealth games in Glasgow and saw winner Ashish kumar receiving a gold, she decided to win a gold for India in Olympics. In the age of drastically changing difficulty level, Dipa Karmakar surely needs an assistance from our government and a world-class training. Now with brighter dreams and plans of practice, Dipa Karmakar is looking forward to Tokyo Olympics 2020 for grabbing a gold and making India proud.