Do you know that 88% of women in our country doesn’t use sanitary pads? They try to manage with ragged clothes, newspapers, leaves etc. This is a rampant practice in rural India. Due to this, 70% of them are facing reproductive tract infections. When Arunachalam Muruganantham came to know about this situation from his wife, he had decided to invent a sanitary napkin at a lower cost than the commercial pads. 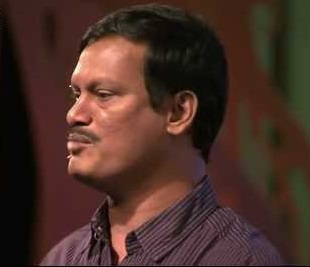 A 1962 year born, Muruganantham is from Coimbatore, Tamil Nadu. Due to financial constraints, he dropped out of school in his 9th class. With the family background of hand-loom weaving, he thought it would be easier to prepare a sanitary pad. But only did he understand the difficulties after setting out to work.

At an initial stage, Muruganantham created a pad within two days and gave it to his wife for feedback. His wife gave a negative response. But this hadn’t demotivated him. Again, he created new sanitary napkins and this time he gave it to his sisters also in order to find out how is it working. It is a taboo in India to talk about menstrual cycle in public or with a man. Even the educated families are in the same opinion. In these kind of circumstances, his experiments would obviously be discouraged within his family itself. He never lost his vision though.

His wife separated from him and the whole locality started to think that he’s a pervert. But this man, isn’t bothered about anyone. Muruganantham further went to contact the local medical college girls to help him out. Even then he didn’t get a proper feedback from the medicos. Finally he decided to try it on himself. With the help of animal’s blood, he created a bladder and a tube attached to it. Whenever he walks or cycles, he made sure that some part of the blood falls on the napkin. This made him the first man to wear a sanitary pad.

At the end of the experiment what he didn’t understand was, why is it a failure within girls and successful in his case. To find this out, he somehow managed to collect used sanitary napkins. After a keen observation, he understood that the material used by private companies is cellulose. This is not the end of his story though. To manufacture a sanitary napkin, the machine required costs around 35 million. Thus, he had also invented a machine with just a budget of Rs.65000 and sent it to IIT Madras for evaluation. In this entire process he lost the company of his mother also.

IIT Madras without his knowledge registered his project to the competition ‘Best innovation for the betterment of society’. Despite so many entries, his machine was awarded the first.

Many companies offered him crores to sell its patent rights, but Muruganantham always refused. He established Jayaashree industries and it’s mission is to sell these machines to rural women with the help of bank loans and non-profit organizations. With this he would create employment and also be able to provide sanitary napkins at a lower cost. Now, these machines are used in 27 Indian states and 7 other countries. He wants to expand it to 106 nations.

The recipient of Padma shri in 2016, TIME magazine listed him as one among the 100 most influential people in the world in the year 2014. An award-winning documentary ‘Menstrual Man’ directed by Amit Virmani featured him. Later he gave so many talks in prestigious Universities. He created the trend of social entrepreneurship. No wonder he’s called the ‘JEWEL OF COIMBATORE’.

Also check out our article on “Arunima Sinha – From The Railway Tracks To The Mount Everest“.