Home Technology What is Net Metering And How It Works?

Net metering is a billing mechanism whereby the consumers who produce their own energy can use it whenever they require depending on their utility requirements. Electricity can be produced from various sources such as sunlight, hydel, wind etc. Nowadays, there is a very high requirement for the consumption of electricity with such an advancing technology. This adds up to the excessive burden of producing electricity which ultimately affects our limited stock of non-renewable sources such as coal, etc. Therefore, net metering has been proposed so as to facilitate investment in renewable sources of energy. It provides an incentive to the consumer to produce their own electricity either by installing a PV (photovoltaic) system or through using windmills. 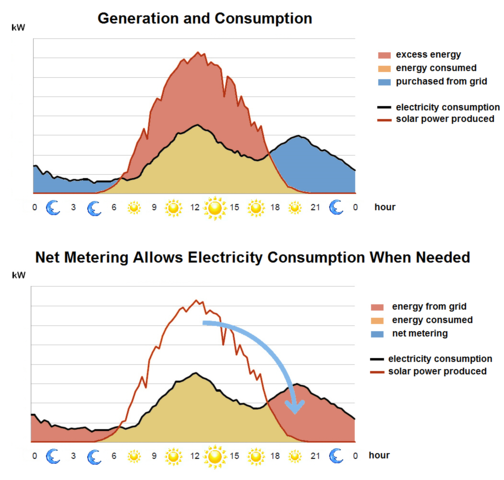 It works exactly like a bank account whereby we deposit our money and use it whenever we require it. Sometimes we may use less than what we have deposited then we have credit surplus in our account with a security that the remaining money can be utilized whenever we want again. Similarly, there are times when we need money more than we have deposited then we can take a loan from the bank to fulfill our requirements with a promise to return it.

Similarly, net metering functions through a utility grid which keeps records of energy generated and energy utilized. When a PV system is installed on the rooftop, it may generate electricity more than that is utilized by the household so the excess electricity produced is fed into the utility grid. But there might be a few instances where consumption by the household might be greater than the energy produced such as in night time then in such cases the electricity can be taken from utility grid itself. Net metering not only allows consumers to use electricity that is produced by them but it also allows them to use electricity provided by government if their usage is high. In such a scenario they would have to pay only for the excess electricity they utilize. A consumer can have credit or debit depending on its requirement.

Net metering was first originated in united states and Minnesota is said to be the first to pass the metering law in 1983. Slowly, other countries too adopted such laws owing to its various benefits. However, the spread was slow because it has remained quite controversial. It has affected the different interest of different people thus posing new challenges.Net metering laws are different in each country. In India, few states have adopted net metering policies such as Tamil Nadu, Andhra Pradesh, Uttarakhand, West Bengal and Karnataka. Other states are too planning to make laws regarding it soon.

READ ALSO:  How Technologies Had Been Changing A Betting Industry

Net metering is not yet popular in many countries but the benefits it offers exhibit a promising future. Many states are already working on is policies and people are also keen on investing in PV system for reduced electricity bills.

No Office Is Ever Complete Without Recovery Software

All You Need To Know About Google’s Project Ara